A Slot Machine Player from Alberta Hits the Millionaire Jackpot 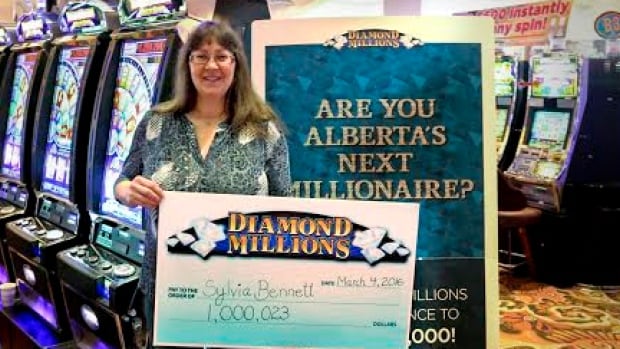 As the woman was playing she looked at the gentleman that was sitting next to her and he said “Yes, you won One Million Dollars!”

Sylvia Bennett from Fort McMurray shows off her million dollar check that she won as she was playing the slot machine at the River Cree Casino and Resort.

Like many who would be if they won a million dollars, Sylvia Bennett is overly excited that she decided to stay at home instead of going on vacation to Las Vegas with her husband as they had originally planned.

These change in plans is what turned this Fort McMurray resident into a millionaire.

Sylvia Bennett who is a sawmill worker, won this amazing jackpot as she was playing the Diamond Millions progressive Slot Machine at the River Cree Casino and Resort on February 26, 2016.

When she hit the jackpot and the numbers came up, she just could not believe it.  Sylvia thought “No, no way!” She was looking at all those zeroes, and then looked at the gentleman who was sitting next to her, and he said “Yes, you won One Million Dollars!” after all of this she still could not believe that she had won.

Sylvia and her husband celebrated with champagne as well as a thirty ounce steak dinner, but she is in no hurry to spend her winnings.

Sylvia states that she will take her time spending her winnings, but she is thrilled to be mortgage free and will be planning a vacation with her husband, as well as their two sons.