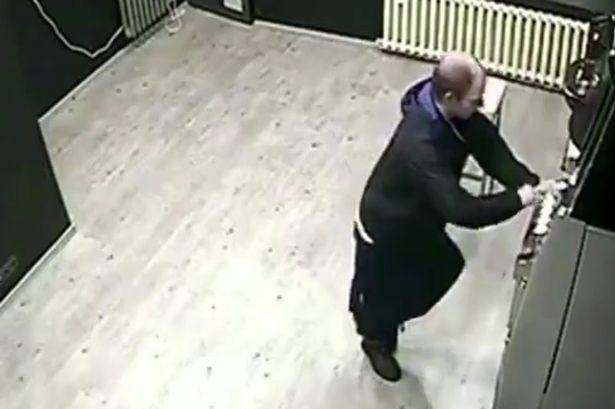 What would you do if you needed to go to the bathroom while you were playing slots?
I guess the man that is featured in a video that has now gone viral would have apparently said he wouldn’t stop playing; he would just go right there. As seen in the beginning of the video this man is fully focused and occupied as he is playing on a slot machine.  As time goes on you can see that the man is apparently becoming more and more uncomfortable as his body starts to shift and sway, as to most of us known as that desperately trying to hold it uncomfortable feeling of needed to use a rest room quick.  As we were children or to our own children we refer to this movement as the “Pee Pee Dance’.
While to most of us these motions would indicate “Step away and get to a restroom”.  Not to are friend in the video; Instead he decides that relieving himself in public was a better solution to the issue at hand. As he steps out of site from the surveillance cameras, he pulls down his pants, squats, and relieves himself in the corner.
As he returns to continue playing the slot machine, he must have felt that oh so familiar urge to go again.  So again instead of going to a restroom, our friend in the video decides to pull down his pants and continue his bowel movement right in front of the slot machine.
What is this world coming too that a man would feel the need to do something such as this in front of a slot machine. It has to be as bad as the one that peed in the slot machines slot. Who would have thought that doing something like this would be okay to do in public. Needless to say, we are sure he got a stern warning about doing such things in public, probably a hefty fine and perhaps needed a bit of counseling to be on the safe side.
We don’t think the casino wants him back after this stunt he pulled, would you?