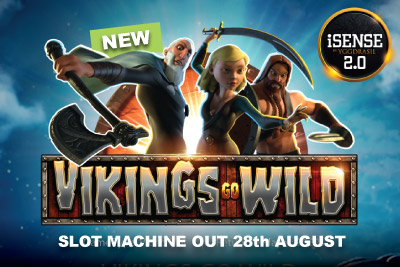 Yggdrasil Gaming has launched its newest video slot game today, Vikings Go Wild.  This slot game is a mysterious adventure that players can join the Vikings as they set to sail across the dark blue ocean in the attempt to slay the mysterious sea monster.

Once a player is in the free spin and is fighting the sea monster, this medium to high unpredictable slot will give that player a chance to turn the triumphant heroes of the game into sticky wilds distinctively stick for the entire span of the free spin.  Within this game is also the opportunity to land on treasure chest which in turn offers mysterious wins as well as the chance to trigger even more of those free spins.

As with all of Yggdrasil Gaming games, Vikings Go Wild can be launched at the same time on your desktop as well as your mobile and it will also feature a very unique promotional concept of Super Free Spins.  The promotional Super Fee Spins will give the player the opportunity to give away a never ending number of free spins to different player groups.

The CEO of Yggdrasil Gaming, Frank Elmqvist stated that they always create games with their players in mind as well as focusing on the delivery of a fresh as well as engaging concept that will stand out from all of the other slot games that are on the market.

This new game Viking Go Wild will also feature a really thrilling free spin concept, as well as the stickiest of sticky wild, which will present each player even additional chances to win huge.